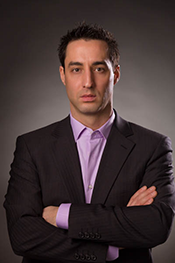 Ryan Claxton, now a Criminal Defence Lawyer, spent the first 8 years of his career as a Crown Prosecutor in both Alberta and Saskatchewan. Taking a position with the Department of Justice at age 24, he was one of Canada’s youngest Crown Prosecutors.

Experience as a Crown Prosecutor serves him well as Ryan now defends his clients: “it gives me the advantage of being able to recognize weaknesses in any given case.” As a Crown Prosecutor, Ryan has run hundreds of trials including impaired driving, dangerous driving, assault, manslaughter, 2nd degree murder, and 1st degree murder. Using the skills he developed early in his career, Ryan now reviews every detail of his client’s case and gives his clients first class legal advice.

Ryan values the trust he has earned from not only the Crown Prosecutor’s Office, but also the Judges. He has worked hard to build a reputation for plain speaking that gets to the point and doesn’t waste the Court’s time. His knowledge and the ability to quickly identify important legal issues have earned him the respect of his opponents and the Court.

Ryan believes it is a genuine privilege to be trusted with representing people in what, for many of his clients, are life-changing events: “every day, when I go to work, I have the duty of speaking for people at a critical time in their lives…I feel privileged to be part of that process.”